How To Film Cinematics In Star Wars Battlefront 2 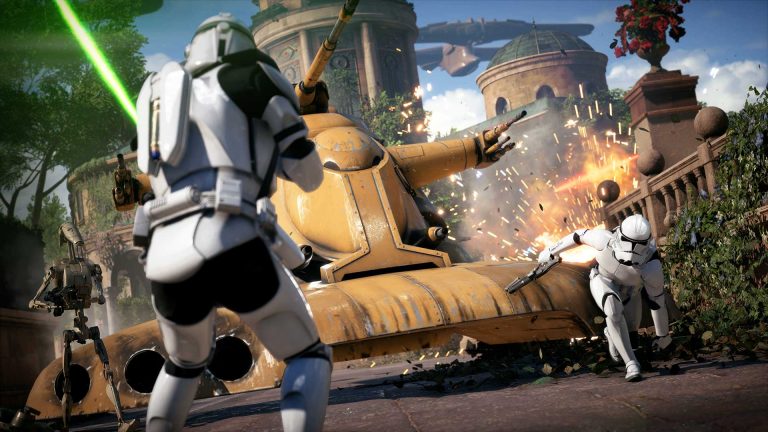 Welcome! to a comprehensive guide on how to film cinematics and machinima in Star Wars Battlefront 2, by turning the HUD off on consoles PS4 and Xbox One, and on PC using the cinematic tools mod.

Hey everyone it’s Andrew! I first need to give a special thanks to Cinematic Captures for helping put together the PC side of the information here. Alright so the first thing you will need is some recording software or hardware. For console I’d recommend an Elgato Game Capture, there are a few different models, you can choose the one you like. And for PC I’d recommend the software Nvidia G-Force Experience. You’ll use these to actually record the footage on your screen that you see in game. There are lots of tutorials out there about how to actually capture footage, but what we’re going to teach you is how to actually manipulate the game to be able to film the footage.

Alright so Star Wars Battlefront 2 is still without a spectate mode and private matches, making it much more difficult to film those amazing artsy shots in game.

Alright so there it is. Now on to PC and Cinematic Tools. So first, if you don’t know, Cinematic Tools is a mod for PC made by this guy, and the tools can be found here. Basically it allows you to manipulate and control a camera in game so that you can film cinematics and films and screenshots and whatever you like! Also just as a side note, if you’re noticing these different clone trooper skins, we had another cosmetic mod activated while filming all this footage.

So once you’re in an offline game mode, spawn in, and you’ll have this cinematic tools menu pop up. Now what I’m going to do is go over all the basic controls for the mod. There’s quite a few and you can do some pretty creative camera work, but don’t worry if you can’t get them down all at once. Just use this as a starting guide. Also, we’d recommend also using a controller to use cinematic tools, as it makes moving the camera around a lot easier. So you might want to plug a controller into your pc. Also we will leave a link to all these cinematic tools instructions in the description.

Alright so once you’ve spawned in, you’ll see your player as always, and also the cinematic tools menu. Now how do you use the tools. 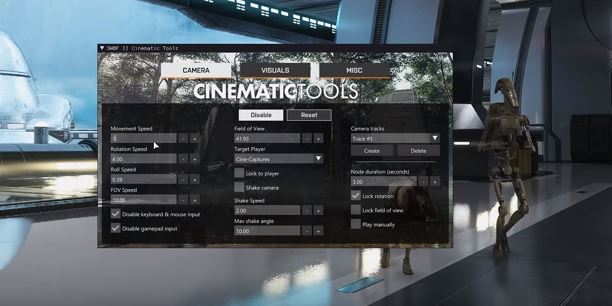 First I’ll go through your hotkeys that will give you control of what you’re doing.

Ok, onto creating a camera track.

So there it is everyone, we really hope this tutorial helps you become a pro at video game cinematography. Also, go check out Cinematic Capture’s YouTube and social media. He takes amazing in game shots and cinematics. Until next time everyone. Enjoy your filmmaking!