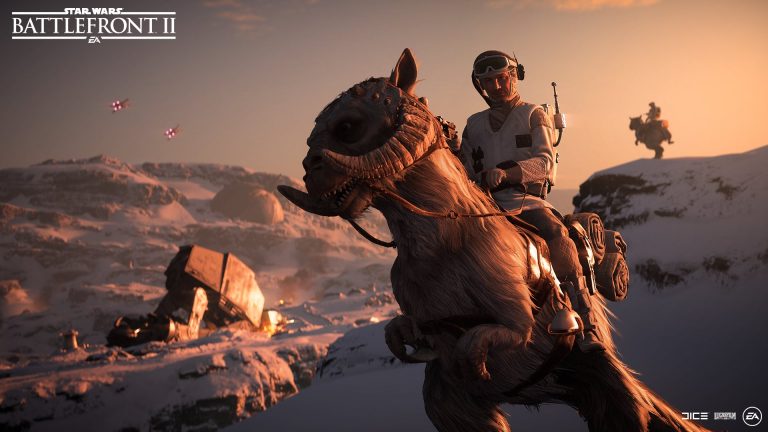 So, you may have noticed that when you go to buy a hero in Galactic Assault, some cost 6000 battle points, and some cost 8000. Well, this price difference isn’t because some heroes are better than others. The price depends on what era you are playing in. For example, if you are playing on Theed Naboo and wanted to spawn as Lando, it would cost 8000 battle points, because Lando is not from the prequel era, not because of his fabulous cape wearing abilities. However, if you wanted to spawn as Yoda or Chewie, it would only cost 6000 credits, because both of these characters appeared in the prequels. The same goes for the Dark side. 6000 points to spawn as Maul, but 8000 to spawn as Vader, because in this time period on Theed Naboo, Darth Vader was still little boy Ani.

Ok something really kind of cool but still kind of broken, two people can ride speeder bikes. So if you walk up to a speeder bike with someone already on top, then hold square on PS4, x on xbox, or F on PC, you get on the back and ride off into the Endor forest like a pair of crazy ewoks. While on the back you do have access to a grenade launcher, but the whole experience is pretty glitchy, and not all that practical. It’s almost as if they never really intended this feature to be fully in the game, but put it there anyway. Also, heroes can jump on too! Master Yoda seemed to really enjoy commanding the way through enemy lines aboard the speeder. Like I said, it’s not really practical for attacking because it’s fairly glitchy, but could be used to flank behind the enemy.

So something we thought a lot of you may not know, is that you can hook and trip enemy AT-AT walkers on the Hoth map, just like the old Walker Assault from the first EA Battlefront. However, I mean maybe I’m just not that good, but it is extremely hard to do. First of all, you can only do it obviously during the first phase of this map when the walkers are actually a part of gameplay, before the match goes indoors. But, you can also only hook them right near the very end of this first phase, just before they reach the base doors. And you can only hook them if someone has fired the ion shot, exposing the walker which brings up the red attack marker. And your team can only have one snow speeder spawned in at any time, which means only one person can bring down the walkers. Plus, it’s not like it was in the last game. There is no automatic lock on. This time, you have to manually fly your speeder around the walker, trying to fly through these yellow hoops to loop and trip the walker. To me, it honestly seems they really don’t want you to be all that successful with this, but please let me know if you’ve tripped a walker before and how many times you’ve done it. And also how to do it well.

Alright this one’s an Easter Egg from the movie. You know that scene where Kylo interrogates Rey in the Force Awakens, then James Bond comes in and saves her. Yeah that stormtrooper is actually Daniel Craig. Well anyway, yeah that room is here on the Starkiller base map. You can get to it on the third phase to the right of the First Order Spawn.

So if you haven’t seen it yet, you can go see the actual Death Star laser on the second death star map. What you might not have known though, is that one of the rebel’s objectives in galactic assault is to actually shut it down. And if they successfully take that objective, the laser actually stops firing. What is also worth noting, is that it seems the second Death Star has improved safety ratings since the first Death Star, with added railings to the control area so that these guys no longer have to worry about getting workers compensation if they have a workplace incident. That’s still not taking into account the massive radiation hit they’d take every time the laser fires, but hey, baby steps.

So, let us know if you knew any or all of these things. And is there anything else you want to know about the game you think we could answer?